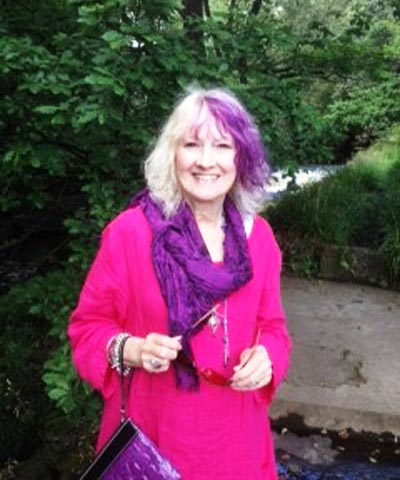 I am motivated by the belief that creativity has the power to bring about change in personal values and social mores. Whilst I enjoy the challenge of working with people on new  project developments where interdisciplinary patterns, skills and knowledge converge, my passion is writing for theatre.Theatre is the most radical of all the creative arts.  Themes, relationships and meanings are brought together in new,dramatic ways where words and action flow between the audience and actor like music, like the tide, in a voluntary act of interpretation which in turn influences culture and  the social setting in which we live.

Her work brings together the skills and knowledge, sometimes untried by them, of professionals, volunteers and amateurs in community events, in public productions, and in educational community workshops.

The Word Garden has a track record of initiation and implementation of local and nationally funded initiatives.  Working with local people, professionals and volunteers, our intra-disciplinary approach demonstrates how combining creative arts activities with scientific research promote innovative, accessible learning across differing ages and ability.

This methodology is relevant to the researcher, to educational bodies, to those interested in how history is made, how it changes over time and becomes part of a legacy for life.

The Scottish Soldiers, the Ouse Washes; the Origins of Landscape Change in the Fens, known as Origins, is a Heritage Lottery funded local legacy project by The Word Garden, a not-for-profit community group working in the East Anglia region.

Origins, inspired by little-known historical events following the Battle of Dunbar, 1650, gave the Word Garden an opportunity to initiate, plan and implement a project of far reaching scientific interest and creative socio-cultural value.

The team, working with local archivists, and specialists in the field, we are exploring, researching, imagining, and retelling human interest stories drawn from primary and secondary sources, authenticated documentation, maps, visual images, county records, personal accounts and folk tales. Historical evidence and scientific research from archaeologists and environmentalists, is integral to project work in new informative ways for participants, readers, and learners.

The primary aim of the Origins project is to tell the story of the Scottish Prisoners and their work on the Great Level so that it takes its deserved place in the heritage of the people who live in the Cambridgeshire Fens. Alongside others, their labours transformed the landscape and created the place where we live today. Firstly, archival and historical research has aimed at providing a factual account of the events that led to the transfer of the Scottish soldiers and how they were employed and treated during their time working in the Fens. This is combined with research into the nature of the landscape at the time, including the physical conditions and natural history, as well as the engineering challenges they faced such the nature of the ground they had to dig and rivers they had to cross to better understand their labours.

Research has also been carried out into the key individuals who were involved in the drainage works. This information will be presented in a publication but also through performance and film that will form part of a 2-day celebration event at Welney Wetland Centre in June 2019. The aim is to bring the historical information to life and make it part of how we see our surroundings. The event will also look to the future of the Fens, and, in particular, ways in which the landscape may change, bringing in key stakeholders such as the Environment Agency, Internal Drainage Boards, and Nature Conservation Organisations, alongside local historians.

This methodology is relevant to the researcher, to educational bodies, to those interested in how history is made, how it changes over time. Recorded in new ways of exploring past events we show the consequences of unforeseen geo-political and economic forces driving the transformation of a unique landscape, now, the Ouse Washes. As drainage work progressed, it became a site of survival, hostility and turmoil, breaking down and re-creating demographic barriers in its wake.

These historical events, largely neglected with the passage of time, became part of a ‘missing’ history which could have remained lost to living memory forever.

The show included her script, Voices Carry, in which two drama students from Bodywork Company Cambridge played the roles Paul and Adelaide Joseph.

Jean secured a grant from the Ouse Washes Landscape Partnership, supported by the Heritage Lottery Fund, November 2015-September 2016, for Our Village Tree.  A new style ‘creative census’ was developed in workshops across three local communities along the unique Ouse Washes, a 21 mile stretch of fertile wash-waters. Using archive, creative writing, objects from the past, historical sources, personal memories and stories, a Creative Census Toolkit by The Word Garden was developed in which her poem, Words for Wash Days appears.

As a playwright credits include:

Voices Carry, adapted from an article by Paul Joseph, 2017, on survival food and passive resistance during the Apartheid struggles in South Africa, and the imprisonment of Nelson Mandela.

The Gypsy Play at Café Marguerite, based upon research and archive transpositions for The Family Adams Project.  The published script appears in the Living Memory Book, April, 2012.  This inter-disciplinary project was funded by the Heritage Lottery Fund.

The Philosopher’s Wife, 2008, a poetic monologue, Cambridge, won a 4-star rating in Varsity, the  Cambridge University Newspaper.  The production was funded by Michaelhouse Arts, Cambridge.

Jean has received funding to develop new work: Sea-Legs, a duologue set on a beach covered with weapons of war.

A Conspiracy of Ghosts, her poetic prose poem was performed for International Women’s Day at the Babylon Gallery, Ely.

Private sponsorship includes a touring show of Bennett’s Talking Heads, 2003; a benefit production of The Vagina Monologues, 2004, and Drawing on the Earth, a creative partnership project supported by the Hourglass Studio Gallery, Hebden Bridge, with funding from the Arts Council.

Jean is a published poet, her work appears in: Peace Poems, Crocus Books; Rowing Home, Cruse Competition and The Humber Mouth Writing Competition Anthology.  She has both attended and run many poetry and drama writing workshops including Writing for Performance, in Ely and during the Canterbury Festival in 2016.